This isn’t a scene from tv series.
This happened last week in Kenya.
Why this incident didn’t get the same attention from media like Charlie Hebdo attack.
Is it because they were…Africans!?. 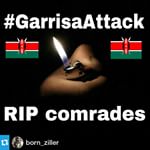 May their soul rest in Peace. I send my heartfelt condolences to those who lost their loved ones during the attack and pray for the quick recovery of those who were injured in Moi University Garisa College . Let us pray for the affected.