The Islamic State jihadist group claimed it executed British aid worker David Haines, in retaliation for British leader David Cameron entering a coalition with the United States against the militants. 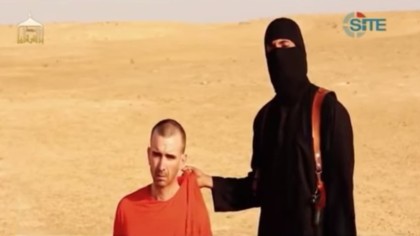 Britain’s Foreign Office said it was seeking to verify the authenticity of the video. If true, the killing would mark “another disgusting murder,” it said.

The video was entitled “A Message to the Allies of America.”
Haines’ purported killer, who appeared to be the same man speaking with a British accent as in the previous videos, tells the British government that its alliance with the US will only “accelerate your destruction” and will drag the British people into “another bloody and unwinnable war.”

Haines was abducted in Syria in 2013 while working for an international aid agency.

The clip, which appeared authentic, featured Haines reading an Islamic State script in which he said he held British Prime Minister David Cameron directly responsible for his execution. “You followed Americans into Iraq, following the trend of British Prime Ministers who cannot find the courage to say no to Americans,” he said. “Unfortunately, it is we the British public, that in the end that will pay the price for our parliaments selfish decisions.”

The killer said the United States must end air strikes against jihadi groups in Iraq. “This British man has to pay the price for your promise, Cameron,” he said. “Ironically, he has spent a decade of his life serving under the same Royal Air Force that is responsible for delivering those arms. Your evil alliance with America which continues to strike the Muslims of Iraq and most recently bombed the Haditha Dam will only accelerate your destruction.
The video closes with a threat to kill another alleged British captive Alan Henning, believed to be an aid worker.Earlier Saturday, Haines’s family had pleaded with the terror group to make contact with them.“We are the family of David Haines,” a statement relayed by the British Foreign Office said Saturday. “We have sent messages to you to which we have not received a reply. We are asking those holding David to make contact with us.”David Cawthorne Haines, 44, was kidnapped by IS militants in March of last year while working with refugees in northern Syria. The extremist organization, which has taken over large parts of Iraq and Syria, recently beheaded two American journalists —JamesFoleyandStevenSotloff — in retaliation for US airstrikes on its forces. Videos of the men’s gruesome killings were distributed to the media and have caused global outrage.IS warned that Haines would be killed too unless London backs off from its support for Washington’s air campaign. At the end of last week’s video showing thekillingofSotloff, the killer — a British-born terrorist nicknamed “Jihadi John” by the media — brought Haines before the camera and said he was next in line.

“We take this opportunity to warn those governments that enter this evil alliance of America against the Islamic State to back off and leave our people alone,” he said.

The aid agency which employed Haines called the threats to his life “intolerable,” the Independent reported.

In a statement last week, the Agency for Technical Cooperation and Development (ACTED) said “A man’s life should never be threatened on account of his humanitarian commitment….we call upon the immediate release of David.”Cameron said that Britain would refuse to be cowed by the terrorists, while Foreign Minister Philip Hammond said British airstrikes were not being ruled out.

“I can assure you that we will look at every possible option to protect this person,” Hammond said, adding, “We have to deal with (IS) on the basis of the wider threat that they pose to the British public as well as this individual.”

“If we judge that airstrikes could be beneficial, could be the best way to do that, then we will certainly consider them but we have made no decision to do so at the moment,” he said.

Be careful, next materiaf is very aggressive so no under 18 should watch this: 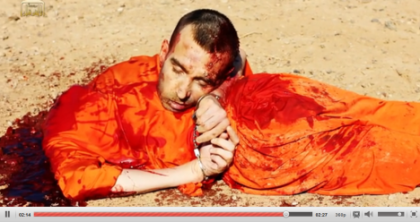 Suddenly, after years of refusing to, Youtube is removing ISIS videos as quick as they go up. The anti-jihad bloggers worked for years to have jihadi recruiting and beheading videos removed to no avail. That said, the full video is all over the web on jihadi sites. The ISIS actor puts the knife to Haines neck and the video cuts away. It returns to show the body with a head on it.

Any recording professionals out there? Is it possible to record audio so clearly in the middle of a desert as if it sounded like it was recorded in a studio with a quality microphone?