The IDF’s Judea and Samaria Division has been preparing unprecedented security for Friday out of concern that noon prayers will result in rioting of thousands of Palestinians in the West Bank.
Thousands of troops will be placed along roads and flashpoints, while IDF officers and Palestinian security apparatuses coordinate their response.

Palestinians have designated Friday a « Day of Rage » amid ongoing violence.
Just on Thursday, seven Israelis were wounded by attacks, while police clashed with Palestinian protesters, resulting in injuries on both sides.

Friday could prove to be a watershed moment in the current wave of unrest. Hamas has been doing everything it can to bring the Palestinian public to conflict with Israel. Hassan Yousef, a Hamas leader in the West Bank, warned that on Friday the entire West Bank and Gaza Strip would be ablaze with demonstrations. This was a relatively unusual statement, as Hamas leaders in the West Bank have tried to keep a low profile, fearing arrest.

A 25-year-old man was seriously injured after being stabbed near the West Bank settlement of Kiryat Arba on Thursday, shortly after a Palestinian man injured four while on a stabbing rampage in Tel Aviv.
A 20-year-old male was stabbed in Afula. The assailant in that incident was overpowered.

A soldier was stabbed in Afula later on Thursday. The terrorist was apprehended soon after. The stabbing marked the fourth terror attack of the day.

The terrorist being apprehended in Afula

Yossi Fahima, director of the MDA in Afula, said the young man had been stabbed in the chest twice and was in moderate condition. « He was conscious when he was evacuated, » said Fahima.

« The terrorist was not wounded other than blows he received from civilians, and was rescued from the angry mob. »

In the wake of the ongoing spate of violent attacks, Prime Minister Benjamin Netanyahu announced that he would hold a press conference in the evening along with Defense Minister Moshe Ya’alon, Public Security Minister Gilad Erdan, IDF Chief of Staff Gadi Eisenkot and Interim Police Chief Bentzi Sau.
Palestinian Authority President Mahmoud Abbas, for his part, called on the Israeli government to « stay away from our holy places ».

The Kiryat Arba assailant is still at large and is believed to have fled in the direction of Hebron. Security forces are currently in pursuit. Reports stated that the victim was stabbed in the Jewish quarter of Hebron, and managed to drive himself to Kiryat Arba.

The scene in Kiryat Arba

The Tel Aviv assailant was shot dead by an Israel Air Force officer after attacking passers-by with a screwdriver opposite the IDF headquarters in Tel Aviv. All four victims were lightly wounded.

The terrorist and the screwdriver encircled in red

« I saw the terrorist stabbing the soldier, I understood it was an attack, so I got out of the car, ran up to him and neutralized him from close range – I was in the right place at the right time. »

The mother of the soldier who was stabbed in the Tel Aviv attack said,

« I saw the terrorist running up to my daughter and stabbing her. I started screaming and crying and I understand that this was a terrorist attack. »

« She sat on her gun so he couldn’t steal it, and the other soldier ran after the terrorist. I’m in shock. I just spoke to her and she is traumatized, » her mother said.

The scene of the attack in Tel Aviv.

Police cordoned off Begin junction, one of the busiest junctions in the city, fearing a second terrorist might be on the loose.

Hours earlier, a Yeshiva student was seriously wounded after being stabbed in the chest in the French Hill neighborhood of East Jerusalem.

The assailant, a 19-year-old resident of East Jerusalem, then tried to snatch the weapon of a security guard on the nearby light rail.

Police rushed to the scene and managed to take control of the attacker while he tried to hijack a passing car.

The soldier who shot the terrorist

The victim, a 25-year-old Haredi man, was treated by paramedics who transported him to the capital’s Shaare Zedek Medical Center.

It is the second stabbing attack in the city in the space of 24 hours.

Site of stabbing attack in Jerusalem Magen David Adom spokesman Zaki Heller told Ynet that « the victim was stabbed in the neck. It happened near the site of the vehicular attack near the light rail several months ago. Other shock victims were treated at the site. »

Dr Ofer Merin, the director of the Shaare Zedek emergency ward, said that they had stabilized the victim’s condition. 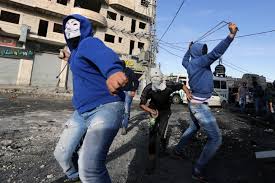 « The paramedics should receive nothing but praise, » he said. « They made no mistakes and have all but saved his life. »

The attack came hours after Mayor Nir Barkat urged residents licensed to carry weapons to carry them, as violence spiked in the city over the past few weeks.

« In spite of what is happening around us, we remain steadfast in our homeland, we are committed to its success, and believe that this land is our homeland and we will never abandon it for anyone. We are not attacking anyone and we don’t want others to attack us. We also don’t want them to enter the holy al-Aqsa mosque. We hold the hands of our brothers who are protecting al-Aqsa. But we are suffering in order to defend it. We call upon the Israeli government: Stay away from our holy places. Our hands are still extended in peace despite our suffering. We are still a peaceful people ».