Britain is now a major exporter of terrorists.

No one who has been paying attention to the growth of radical Islam in Britain should have been surprised that the terrorist who stood over murdered American journalist James Foley had a London accent.
Authorities in London raised the terror level in the United Kingdom on Friday from « substantial » to « severe. »

The move comes after Islamic State (ISIS) released video of some 150 Syrian soldiers, stripped to their underwear, being marched across the desert to their deaths – another mass execution. 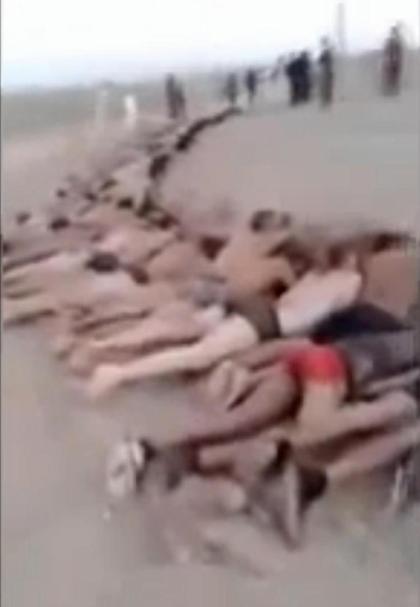 Also, just last week ISIS displayed gruesome footage of the beheading of American journalist James Foley. The executioner in that video is believed to be a British national.

British officials cited such recent developments as the reason for raising the threat level. « IS is a greater and deeper threat to our security than we have known before, » British Prime Minister David Cameron said.

The idea of staying out of Syria has now become more complicated, however after ISIS extremists announced the killing of Foley and threatened to kill more U.S. hostages in Syria.

Obama leaves next Tuesday for a trip to Estonia and a NATO summit in Wales. The crisis in Ukraine is expected to be a focus of discussion among NATO leaders.

« We will respond calmly and with purpose, » he vowed. « And we will do so driven by the evidence and the importance of maintaining the liberty that is the hallmark of the society that we defend. But we have to listen carefully to the security and intelligence officers who do so much every day to keep us safe. »

Cameron’s strong statement contrasted sharply with President Barack Obama’s bizarre admission in a press conference Thursday that he didn’t yet have a strategy in place on how to deal with the jihadist army.

« The suggestion seems to have been that we’re about to go full-scale on an elaborate strategy for defeating ISIS, » he told reporters. « I don’t want to put the cart before the horse. We don’t have a strategy — yet. »

The president’s words come as both current and former U.S. intelligence officials said jihadi chatter has picked up among overseas terrorists organizations on phone lines and the Internet ahead of this year’s 9/11 anniversary.

« This is certainly concerning, but as of yet we can’t pinpoint what or if they are planning a particular attack, » one U.S. government official told The Blaze.

The official said it’s not clear if an attack is being planned. But he acknowledged there was a similar increase in chatter before 9/11. And some say terrorists from both al Qaeda and Islamic State (ISIS) may want to launch an attack.

Even so, Obama said he is still weighing the prospect of military action in Syria. But while the president tries to decide what to do, the terrorists of ISIS are not sitting still.

Even members of his own administration have been vocal about the need to move into the country. Democratic lawmakers are calling on the administration to take action as well.

Sen. Bill Nelson, D-Fla., just back from Turkey, said Thursday that the United States needs to have a military plan.

« Sooner or later we’ve got to take the fight to ISIS in addition to what we’re doing in northern Iraq and protecting the Kurds in Kurdistan. Because sooner or later we’re going to have to deal with them, » he warned.

Nelson said the United States can avoid boots on the ground in Syria by cooperating with the Free Syria Army.

Earlier this month the president authorized limited air strikes against ISIS in Iraq. He initially seemed to rule out the option of extending the strikes into Syria where ISIS jihadists enjoy a safe haven.

Over a thousand British Muslims are now fighting for the Islamic State, also known as ISIS. And more are joining every day.

« The key thing to realize about British fighters in Syria is they’re not there to take a back seat role. They are very much at the forefront of this conflict, » Shiraz Maher, an expert at the International Centre for the Study of Radicalisation, said.

Britain is now a major exporter of terrorists, the result of multiculturalism. There have been warning signs for years.

Eight years ago, CBN News showed viewers Muslims protesting in London against the Mohammed cartoons and chanting « Jihad is on its way. »

Islamic halal food is everywhere. And Islam is today the fastest growing religion in the United Kingdom.

Even though Muslims are still a relatively small minority in Britain, many Britons feel as if their nation is being handed over to Islam, that the government doesn’t care about promoting or protecting traditional British, Judeo-Christian values either because it doesn’t believe in them anymore, or because it doesn’t want to be labeled as « intolerant. »

British civilization has been a gift to the world. But the British elites don’t care so much about their own civilization anymore. And it is into this vacuum that Islam is advancing.

Sure, the British still care about their queen and tradition, but radical Muslims have been allowed and even encouraged to build a parallel society within this officially Christian nation.

The West’s Sin of Self-Hatred

« The reason we have capitulated in the West so much to Islam is self-hatred, » said Anne Marie Waters, a former leftist who runs Shariawatch UK, and a rising star within the UK Independence Party (UKIP).

« And the Left not only doesn’t say anything about it, but continues to push for it, even though it knows, even though it can see that it’s killing girls, » Waters continued. « We know for a fact there are mosques in this country where little girls of 8,9,10 years of age are being married and being raped. »

When British soldier Lee Rigby was decapitated in the streets of London, one of the first things Prime Minister David Cameron said was that the murder was not because of Islam.

After the Foley decapitation, Cameron said it again.

And to be sure, many Muslims have condemned the murder.

Shuman Khan, a London Muslim, said, « As a Muslim, I feel this shouldn’t be. You shouldn’t do bad things. »

« I think it’s disgusting. I think a lot of extremists have taken over and hijacked Islam, » Qaiser Iqbal, a London Muslim, said.

But Waters said that while peaceful Muslims are not to blame for the violence of radicals against women and non-Muslims, she saids the religion of Islam is to blame.

« We come back to this ‘It’s only a tiny minority of extremists. It’s got nothing to do with Islam.’ But the point is, this stuff is coming directly from the Quran, from the Hadith, » Waters told CBN News.

The British government’s weak response to radical Islam has led to the formation of citizen groups and protest movements like the English Defence League and BritainFirst.

BritainFirst confronts Sharia patrols and has horrified the British establishment by having the nerve to go into mosques to pass out Bibles to Muslims.

But when CBN News was with Golding, he was dodging the police, who seem to view him as a troublemaker.

The British government is going to have to decide whether it cares more about being viewed as tolerant, or about stopping terrorism because the whole world is now paying the bill for Britain’s experiment in multiculturalism.

« We’ve got to start dealing with this, » Waters said. « We’ve got to say, ‘Look, we have freedom of speech. You can’t beat up women. We don’t stone people to death for their sex lives. You have to accept that or you can’t live here.' »