Nuclear agreement notwithstanding, Iran continues to blatantly work on weapons development.
The latest missile produced, the Emad, has precision capabilities allowing the controller to guide it all the way to its target.

Iran announced on Sunday that it has successfully test-fired a new long-range precision-guided ballistic missile, named Emad, that can be controlled and guided to the target until the moment of impact.

“This missile which has been fully designed and made by Iranian Defense Ministry’s scientists and experts is the country’ first long-range missile with navigation and strike-controlling capability; it is capable of hitting and destroying the targets with high-precision,” Iranian Defense Minister Brigadier General Hossein Dehqan told reporters after the successful test, Iran’s Fars news reported.

The Iranian Defense Minister called the successful testing of missile

“a technological and operational jump in a strategic field,” and said “we don’t ask for anyone’s permission for boosting our defense and missile power; we resolutely continue our defense programs, especially in the missile field, and Emad missile is a conspicuous example.”

Dehqan also said that the mass production and delivery of the Emad missile to the Islamic Republic’s Armed Forces will considerably “increase their power and tactical capabilities.”

The Iranian Armed Forces have recently test-fired different types of newly-developed missiles and torpedoes and tested a large number of domestically-produced weapons, tools and equipment, including submarines and ‘suicide’ Unmanned Aerial Vehicles (UAV).

As noted by Voice of America, “October 18 is “Adoption Day,” senior administration officials announced at a US State Department briefing. On that day, they said, Iran will start to remove thousands of centrifuges and put them into storage. It will also make other ‘major changes’ to its core nuclear infrastructure. Additionally, Tehran will put transparency measures in place at its uranium mills.” However, the implementation of these steps could take months.

Iran claims that its military development is for defense purposes only.

However, many of these weapons were given to the Hezbollah terror organization and used against Israel’s civilian population during the Second Lebanon War in the summer of 2006.

Iran has repeatedly threatened to use its missiles against Israel. 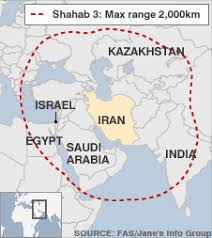