While Netanyahu demanded that the world condemn Abbas for incitement and support of terror, UN Chief Ban Ki-moon equated Palestinian terrorism with Israeli self-defense, calling for the reduction of violence on both sides.

Prime Minister Benjamin Netanyahu charged Palestinian Authority (PA) head Mahmoud Abbas of joining forces with extreme Islamic terror elements and of being the primary driving force behind the wave of terror attacks that has plagued Israel over the past weeks.

“Your visit comes at a troubling time,” Netanyahu told UN Secretary General Ban Ki-Moon at a press conference in Jerusalem on Tuesday. Ban came to Israel on a surprise visit in an attempt to calm the tensions in the country.

“In recent weeks, Israelis have been deliberately run over, shot, stabbed and hacked to death, and in large part this is because President Abbas has joined ISIS (the Islamic State terror organization) and Hamas in claiming that Israel threatens the al-Aqsa mosque,” Netanyahu declared.

In this context, Netanyahu mentioned the Palestinian attempt at UNESCO to “deny the Jewish people’s historic connection to the Western Wall” by having it declared a Palestinian.

“These are the real threats to the status quo,” the premier stressed.

Netanyahu called on the world to tell the truth about the real cause of the Palestinian terror cause.

“I believe it’s time to tell the truth about the causes of Palestinian terrorism. It’s not the settlements. It’s not the peace process. It’s the desire to destroy the State of Israel, pure and simple.”

Abbas has been “fanning the flames” of violence, Netanyahu said again, listing instances of Abbas’s incitement to murder.

“President Abbas has not condemned a single one of the 30 terrorist attacks on Israelis over the last month. And he continues to glorify terrorists as heroes.”

“In the face of this terrorism, Israel is acting as any democracy would to defend its citizens,” Netanyahu said, indirectly countering allegations made by Ban that Israel was using “excessive force” against Palestinian terrorism. “We are not, I repeat, we are not using excessive force.” “if the international community truly wants to help end the bloodshed and the violence, I believe it must affirm Israel’s proven commitment to the status quo on the Temple Mount, it must support Israel’s right to self-defense, and it must hold President Abbas accountable for his dangerous words, saying these were “pressing subjects” and the “order of the day.”

Ban called for calm saying “these are difficult times for Israelis and Palestinians. I am here in the hope that we can work together to end the violence, ease the tensions and begin to restore a long term political horizon of peace,” he said. 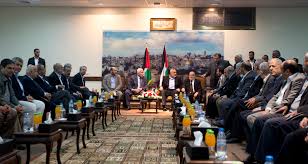 “I deplore the random attacks against civilians, such terror attacks make every place unsafe and every person regardless to gender or age a potential victim,” he said.

“Those attacks by individuals are not taking place in a vacuum. Over the past weeks, I have been deeply troubled by statements from Palestinian militant groups, including Hamas and Islamic Jihad, praising such heinous attacks. In a recent call with President Abbas, I voiced my deep concern over instances of inflammatory rhetoric and urged all to refrain from it,” he added.

He also urged the Israeli government “to do its utmost to help calm the situation.” However, he again criticized Israel for its actions against the wave of terror, saying “security measures can be counterproductive if they are applied without special efforts to defuse situations before people lose their lives. If the use of force is not properly calibrated, it may breed the very frustrations and anxieties from which violence tends to erupt. I urge Israel, as a democratic state, to guard against such incidents and to conduct thorough investigations when necessary.”

Warning that “Israelis and Palestinians stand on the brink of another catastrophic period of violence,” he said, “we need to keep the situation from escalation into a religious conflict, with potential regional implications,” he added, saying that the only way to end the violence was through direct negotiations. Here is disturbing footage of a cute Palestinian-Jordanian preschool girl named Rahf holding a knife, while declaring her desire to stab a Jew as her father encourages her.

This is the ultimate in child abuse. When a parent encourages a minor to harm or murder another human being, that person has failed as a parent and has failed to be a productive member of society. So when you have an entire generation raised on anti-Israel, anti-Semitic rhetoric, there can be no possibility of peace.
What people don’t realize is that this is exactly the point. Hamas and their ilk do not want peace. Ever. So they instill hatred in the young to carry forward the aggression.
Children, like Rahf, deserve a better life. A free life. It’s up to us to SHARE what is happening and stop the abuse!

WATCH: Hamas Cleric Swears on Koran that Israel will be Wiped Clean of All Jews.

Hamas cleric and TV host Sheikh Iyad Abu Funun delivers a sinister message, swearing on the Koran that the entire Land of Israel will be wiped completely clean of all Jews.

As such, Hamas is using the increased terror to capitalize on its horrific goal, inciting further terrorism, resulting in additional attacks that have been plaguing Israel. Perhaps the time has come for Israel to permanently eliminate the threat of Hamas. It is clear that they do not want to make peace with Israel.