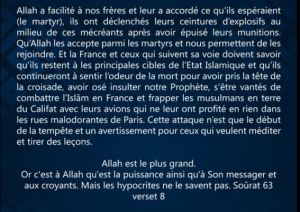 Roughly 350 were wounded, many critically.

Islamic State (ISIS/IS) terrorists struck young concert-goers, soccer fans and Parisians enjoying a Friday night out at popular nightspots in what was the deadliest attack in France since the Second World War.
The death toll to date is 129 and rising.

The online statement said eight terrorists armed with explosive belts and automatic weapons attacked carefully chosen targets in the “capital of adultery and vice,” including a soccer stadium, where France was playing Germany, and the Bataclan concert hall, where an American rock band was playing and “hundreds of apostates were attending an adulterous party.”

“The stench of death will not leave their noses as long as they remain at the forefront of the Crusaders’ campaign, dare to curse our prophet, boast of a war on Islam in France, and strike Muslims in the lands of the caliphate with warplanes that were of no use to them in the streets and rotten alleys of Paris,” ISIS said.

France is part of the U.S.-led coalition that has been striking ISIS in Syria and Iraq over the past year.

The statement, made in Arabic and French, was released online and circulated by ISIS supporters, along with an audio version read by an unidentified speaker whose voice strongly resembled that of an announcer for the IS radio station Al-Bayan. It was not immediately possible to confirm the authenticity of the statements, but they bore the terrorists’ logo and resembled previous IS statements.

The statements did not provide the nationalities or other information about the attackers.

Thousands pay tribute Saturday night at Rabin Square in Tel Aviv to the victims of ISIS terror in Paris.

French anti-terror police were working to identify potential accomplices.
Authorities said eight attackers died, seven of them in suicide bombings, a new tactic in France.
Police said they shot and killed the other assailant.

Jihadists have targeted France on a number of occasions, including in January 2015, when terrorists stormed the offices of Charlie Hebdo, a satirical magazine that had published caricatures of the Prophet Muhammad deemed offensive to Muslims. That attack, which killed 12 people, was claimed by al-Qaeda.

“On behalf of the people and Government of Israel, I extend our deepest sympathies to the people of France and to the families of those who were brutally murdered in Paris last night. We also extend our wishes for a speedy recovery to the wounded, Prime Minister Benjamin Netanyahu said in a press briefing Saturday evening.

“Israel stands shoulder-to-shoulder with France in this common battle against militant Islamic terrorism. I’ve instructed Israel’s security and intelligence forces to assist their French counterparts and their counterparts from other European countries in any way possible.

“Terrorism is the deliberate and systematic targeting of civilians.
It can never be justified,”
Netanyahu said.

“Terrorism must always be condemned. It must always be fought. Innocent people in Paris,
like those in London, Madrid, Mumbai, Buenos Aires and Jerusalem,
are the victims of militant Islamic terrorism, not its cause.
As I’ve said for many years, militant Islamic terrorism attacks our societies because it wants to destroy our civilization and our values.

“I call on the entire civilized world to unite to defeat the plague of worldwide terrorism,”
Netanyahu declared.
“An attack on any one of us should be seen as an attack on all of us. All terrorism must be condemned and fought equally with unwavering determination.
It’s only with this moral clarity that the forces of civilization will defeat the savagery of terrorism.”

President Reuven Rivlin stated:
“We are deeply grieved by the murderous terrorist attack yesterday, in the heart of Paris.
On behalf of the citizens of Israel, I send my sincere condolences to the French people and to the families who lost their loved ones.
The State of Israel stands alongside you in your uncompromising struggle against terrorism.

Jerusalem Mayor Nir Barkat, in statement on deadly attacks Friday in Israel and Paris,
says world must unite against terror.

“Terrorism strikes indiscriminately, striking and killing the innocent,” he continued. “We, citizens of the free world, in the face of this threat, we stand united in our struggle against those who seek to kill and maim, and to use violence and destruction. Our prayers are with the injured for a swift and full recovery.”

“Today the entire world understands what we have been experiencing in Israel and Jerusalem in recent decades – murderous terror fueled by hate and and a death mission against innocent civilians in the West. We must unite together against all forms of terror. From Jerusalem, we send our deepest condolences to the French nation, to the families of the victims who were murdered in Paris and to the Litman family here in Israel who lost two family members yesterday as well,” said Jerusalem Mayor Nir Barkat, referring to the terror attack near Hebron on Friday afternoon.