« You’d think there’d be ego, but there hasn’t been one problem with ego in this whole thing, » singer says of all-star group.

Hollywood Vampires – the supergroup featuring Alice Cooper, Johnny Depp and Joe Perry, among others – will be mounting an 18-date North American tour this summer, and that means one thing to the singer. « Apparently, Johnny’s not making any movies this summer, » he says with a big laugh. « I think he loves playing rock & roll more than he does making movies. He calls movies his day job. »

Ever since the group put out its raucous self-titled debut last year – a collection of cover songs by artists Cooper calls his « dead drunk friends » that made it into the Top 10 of Billboard’s hard-rock chart – Hollywood Vampires have only given short glimpses into what they’re capable of live. They played a couple of star-studded gigs at Los Angeles’ Roxy Theatre and a date at Brazil’s mega-festival Rock in Rio, and they debuted a new original tune and paid tribute to Motörhead’s Lemmy Kilmister with a fiery performance at the Grammy Awards this past February. Now, with each of the musicians’ schedules somehow in alignment and the addition of Stone Temple Pilots’ Robert DeLeo replacing bassist Duff McKagan, they’re ready to take the show on the road. « This is a real band here, » Cooper says. « We actually tour and do shows, argue, do everything. » He laughs. 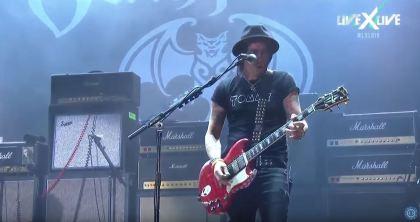 The singer and guitarist Joe Perry spoke to Rolling Stone in early April in anticipation of the tour, which kicks off in Verona, New York, on May 24th, to preview what fans should expect.

What can people expect on this tour?

Joe Perry: It’s really about us having fun. Obviously, I love watching the audience get off, but to turn around and look at the people onstage with me, I’ve just got to shake my head. Never in my wildest dreams. To have Matt Sorum and Johnny Depp and Alice – I mean, I’ve known Alice for years and years and years, but we’ve never really had the chance to play together. And Johnny’s sat in with us a few times on Aerosmith shows, but we’ve never really had the chance to do something like this. So it’s really exciting. All that excitement is what we’re going to bring to the stage and put it out there for the audience.

Will it be a theatrical show, like an Alice gig?

Alice Cooper: I don’t think it needs to be theatrical. It needs to have its own flavor.

Perry: It’ll be a good rock show. I don’t think we’re going to go in with a bunch of bombs, fireworks and all that stuff. I don’t think we need that. And it takes away from the music. We’ll just let the music do the talking.

Joe, how would you describe Johnny Depp as a guitar player?

Perry: He’s really into the blues. You just have to look at his guitar collection. I’d say most of the guitars he has out, ready to be played are old Martins from the Thirties, Forties, Fifties, the early stuff. But there’s that movie Chocolat, where he played the river gypsy, and he’s playing guitar around the campfire and they’re dancing. 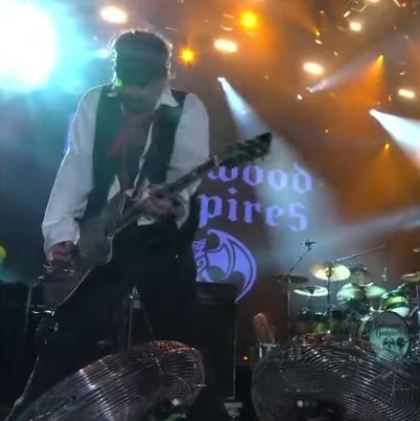 That’s him playing; that’s not a trick of the camera. When I found that out, that’s when I knew how much he’s gotten into guitar. He can sit in probably with just about anybody, and really blow them away. He’s really good.

How did you get Robert DeLeo to replace Duff?

Perry: About a week before we found out that Duff was going with GN’R, I got a text from Robert. I’ve known him since right after their first record came out. He came up to [my studio,] the Boneyard, and Steven and I and him spent a weekend and wrote some songs together. I don’t think anything ended up on a record, but we got to know each other. And he’s a really amazing musician. So when I brought his name up as a potential to fill in Duff’s spot, everybody was « Yea. » He’s really, I’d say, underestimated. I think he’s going to knock everybody out. We’re going to miss Duff, but I think him and Matt will get along great musically. I think it will be a really good matchup.

Who else did you consider for bass?

Cooper: I was suggesting John Paul Jones. He’s not doing anything. Come on. Or Geezer Butler. He might be good, too, but Black Sabbath are on their last tour. And there’s always that McCartney guy. He plays bass, doesn’t he?

What songs are you looking forward to playing on the road?

Cooper: Pretty much everything that’s on the album. It’s going to be « My Generation » and « I’ve Got a Line on You. » And there are three or four original songs: « Dead Drunk Friends, » « Raise the Dead » and « Bad as I Am. » I think « Bad as I Am » made its bones because of our performance on the Grammys. It was Number Two on the hard-rock chart.

Perry: « As Bad as I Am » really stands out to me. It’s a really powerful rock song. And then I love playing anything by the Who, especially « My Generation. » With this band, it kicks ass.

Will you be adding any cover songs?

Cooper: We didn’t have Bowie in the set, and now that he’s passed, we will. And we’ll probably keep « Ace of Spades » in. If Lemmy were still alive, we would have asked him to join when Duff jumped out.

What David Bowie songs would you want to do? 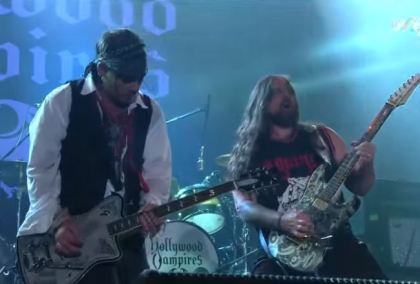 There’s a looseness to the way you play your songs.
Cooper: That’s it. Every band that’s ever made it was a bar band at some point. It was a band that played four hours a night and had to do « Mustang Sally » and every dance song that ever was, and that’s how a band gets good. It’s an old tradition to go back to that and be a bar band again, only we’re a pretty big bar band [laughs].

You’re a bar band that plays the Barclays Center.
Cooper: That’s not a bad bar band right there. And anyone can get up there and play. If Jimmy Page was in town, I’d say, « You wanna play on ‘Train Kept-a-Rollin »? Come on up. Anybody that’s in that era or made their name doing that, I would absolutely include them at any time because you know they can step in and play any song you’ve got up there. They’re not novices and we have a common language. You say « Back in the U.S.S.R., » and everybody knows that song.

Have you been recording new songs?

Perry: I’m hoping we can knock a few off before we go out. But even if we don’t, we certainly have enough songs between the deluxe Vampires record and, hey, we’re free to play whatever we want.

Cooper: The funny thing is I’m writing right now for my new album. And we’re also writing for the Vampires album. So there’s two separate things going on. Every time I come up with an idea that doesn’t quite fit my album, I think, « Let’s direct this more towards the Vampires. » But I think Johnny and these guys are always working over there, and everybody in the band is always writing. So when we get together, everybody will just plop a bunch of stuff down on the table and say, « What fits? » 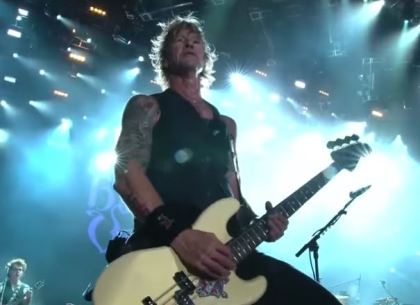 With so many big personalities in the band, how do you expect traveling to go?
Cooper: It might be worth documenting. The fun thing about this is when I said we argued earlier, I was joking. I never heard an argument. Even in rehearsal. You’d think there’d be ego problems in this, but there hasn’t been one problem with ego in this whole thing. I think everybody’s just happy to be doing it because it’s fun to do.

Perry: We’ll all have our own buses, but I have a feeling that there will be a lot of switching around just to hang out depending on the drives. We’re all friends. And the tour’s pretty intense. It’ll give us some time to hang out. So I’m really looking forward to it. We’ll see how it goes.